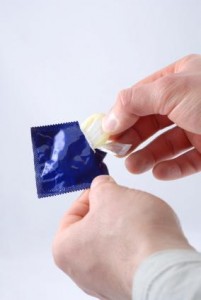 Male condoms are very commonly used. A condom is a thin sheath which envelopes the glans and shaft of the penis. The condom provides the best protection against STI’s and prevents semen from entering the vagina. The success rate of condoms if used perfectly each time a couple has intercourse in the first year of use is 97 percent. On average, condoms are only 76 percent effective in the first year of use. Common errors with using condoms is not using condoms with every act of intercourse, not using proper lubricants with latex condoms, and inaccurate position of the condom on the penis. The advantages of using condoms are that they are widely available and inexpensive. Condoms also are able to protect against STI’s while preventing pregnancy! Unfortunately condoms can decrease the enjoyment of sex.  Condoms also break and can slip or slide. Another disadvantage is that oil-based lubricants can damage the condom.

Female condoms are the opposite of male condoms. The Reality female condom, for example, is a sheath used only one time, which contains two flexible rings, 7.8 cm in diameter and 17 cm long. The ring at the closed end of the condom is placed in the vaginal canal. The other ring stays outside the canal after insertion. The female condom prevents semen from entering the vagina. The male and female condom should not both be used collectively as they can hold to each other and cause slipping or other failure with both condoms. The use of  female condoms is not very common; less than one percent of women in the United States use this method of contraception. This method is 75 percent efficient in preventing pregnancies. The female condom, unlike the male condom, does not deteriorate with the use of oil-based lubricants. The condom can be inserted up to 8 hours before intercourse. The inside of the sheath is coated in a silicone lubricant. A disadvantage of using female condoms is that the lube doesn’t contain spermicide. Female condoms are difficult to place in the vagina and the inner ring can be uncomfortable. The female condom may cause a urinary tract infection if left in the vaginal canal for long periods of time.